I’m pretty sure I’ve ranted before about the lack of places to go to for brunch where we are in England. Compared to the choice we had in Melbourne, this town is pretty dire. What we did try one Saturday morning is a chain restaurant called Bill’s. While Bill’s has the atmosphere of what a brunch place, the food itself was OK. My partner had the French toast and I the vegetarian breakfast stack with avocado, hummus and poached eggs. Just as he got though his French toast, my partner looked up and said – I’m sure you can make this a lot better!

Challenges like that never go unmet in our house. In many places, a breakfast order of French toast comes with a scoop of ice-cream in the centre but it was at  Cafe Arcadia in Melbourne that I first saw French toast being serves with yoghurt and a berry coulis and thought to myself – “Now there’s an idea worth stealing!”. Equipped with a challenge and a stolen idea from our former home, I set out to make the most delicious, yet slightly healthy French toast I ever did ( or so I thought). Turns out this isn’t the first time I tried to make French toast as in my folder of food photos, I found a whole lot more pictures of French toast as did I in my folder of photos from France.

The tastiest and most indulgent French toast is when a day old loaf of Brioche is used as the bread. However, I’ve gone for more generic bread that looked pretty. While slicing the bread, I sliced a little bit of my finger too and the bit of bread you find missing in the pictures are where my injury made itself obvious shall we say. Don’t be grossed out as indeed, the French toast was tasty and much better than Bill’s French toast. Though I will admit that their maple-flavoured syrup was tastier than my real maple syrup 🙂 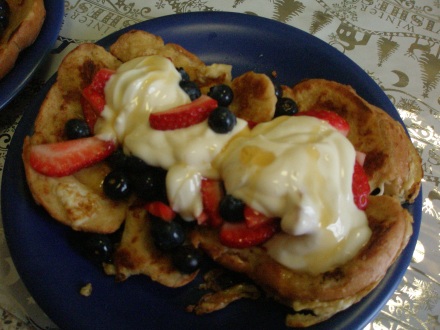 French toast for breakfast anyone ?