It just so happened that I over-ordered carrots in our last Tesco delivery. While the temptation was great to whip up a carrot cake (mmm…), I have been warned by my partner to stop making delicious, sweet things and trying to fatten us both up for the wicked witch to consume. So, I sought out something different and savoury. I can’t say that it is the healthiest of recipes but the portions definitely were of a healthy size and the salad added a nice touch to the dish – I thought !

As usual, I shopped around for some recipes and used Ecualombian and my old favourite Amanda Laird  from the Christmas souffle recipe. The end result was delicious. We had 1 each for lunch and one spare for a “leftovers” lunch on the weekend. Just beware that it isn’t a quick dinner option but is worth the time and effort. Also, this one isn’t for those trying to watch their calorie intake. Hope you try it and like it! 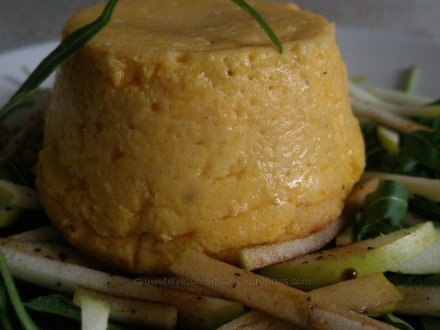 Carrot souffle on apple and rocket salad with balsamic vinegar

END_OF_DOCUMENT_TOKEN_TO_BE_REPLACED

1. I left out the parsley and I forgot to add salt and pepper but that’s OK, the cheese has enough flavour to make up for this.

2. I used thyme and sage as herbs to flavour the soufflé. To incorporate them, I heated the milk on the lowest setting with sage and thyme for 15-20 minutes allowing the flavours to infuse. It was this milk that I then used to make the white sauce.

3. I have included images of the process of soufflé making in the collage below. When I added the milk to the butter-flour mixture it went really thick and I panicked as I’d never made soufflé before. It got worse when I added the cheese and then the egg yolks (Pictures 5,6,7). However, the addition of soft peaked egg whites fixes it all up (Picture 9). Yay! Trust me when I say it tasted amazing – a very forgiving recipe I concluded!

4. Once the soufflés have cooled, they deflate (Picture 13). At this point, ease them out of their ramekins and place them in a larger baking dish upturned (Picture 14)

5. The recipe makes exactly enough batter for 2 soufflés so follow it to a tee if that’ s all you want. Most other recipes I found seemed to be for 6-8 servings which I wasn’t interested in.

(b) The tomato sauce

My partner and I are both not huge fans of cream and I thought I’d give the creamy sauce a bit more flavour before baking the soufflé for the second time. I got the idea from the recipe link above but my recipe was as follows.

2 cloves of garlic with skin

1. Roast the tomatoes and garlic at 180ºC until the skins of the tomatoes crack and they start oozing out juices. Discard the garlic.

2. In a small saucepan, add the tomatoes, cream and spices and cook until the tomatoes go mushy and the flavours blend into the sauce. You want it to taste a bit sweet as the soufflé will be on the salty side.

3. Sprinkle freshly grated parmesan over the upturned and cooled soufflés and bake for 15-20 minutes at 150ºC until the tops are golden brown.

5. It is a rich and decadent main so take your time…..

1. I used rocket leaves only

2. I used a golden delicious apple instead of a red apple

3. I toasted the walnuts slightly in a pan on dry heat

4. I tossed the apples in a bit of melted Manuka honey to give them a bit of flavour and to ensure that they didn’t turn brown.

6. I used balsamic vinegar instead of red wine vinegar. 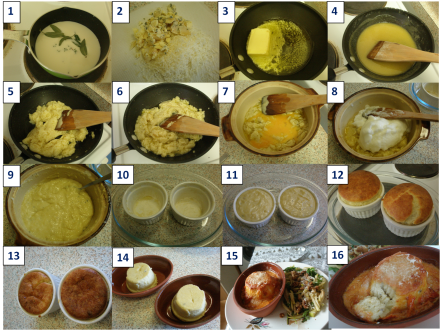