It wasn’t until January this year that I heard about Burns’ night and of Robert Burns, the famous Scottish poet (http://en.wikipedia.org/wiki/Robert_Burns). For those of you who are blinking now like I did when I first heard of it, here’s a little spiel about Robbie Burns. He is Scotland’s most famous poet know for several popular songs including “Auld Lang Syne” which is often sung at midnight on New Year’s Day. He was also known for his many love affairs some of which he captured in his poetry. Robbie Burns is the most popular of poets who wrote in the Scots’ language.  As it seems to happen with a lot of famous people, Robbie passed away at the not-so-old age of 37 after several months of deteriorating health and mental state. It was a few years after his death that some of his friends got together and started celebrating his life and work in what is today called “Burns’ night’.

In several places around the UK, Burns’ night dinners are organised with great enthusiasm. They feature a Scottish menu of Haggis (the vegetarian version is also available), broth, a dessert known as Cranachan and tastings of Scotch whiskey. The Haggis is often ushered in by Scottish men in clan kilts with the song “Ode to the Haggis” being played on bagpipes. This song too as one of Robbie Burns’ pieces. After stuffing yourself full of food and drink, you are challenged to take part in Céilidh (pronounced : Kay-lee) dancing (http://en.wikipedia.org/wiki/C%C3%A9ilidh)  which I highly recommend.

Overall Burns’ night’s dinners are a lot of fun and hope this recipe will give you a tiny feel for it. The original Cranachan is made of thick double cream but I used Greek Yoghurt instead. 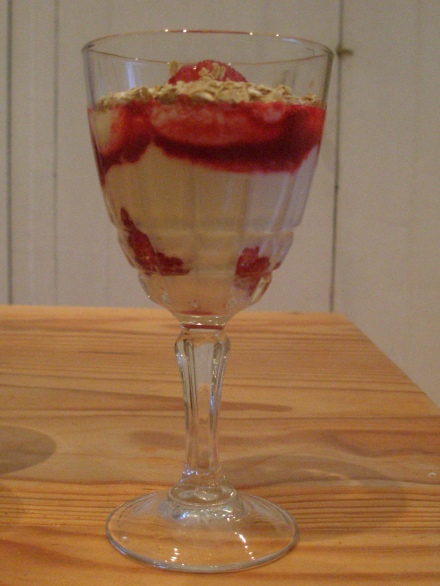 1-2 tablespoons of honey, melted (adjust this to suit your taste)

A tiny knob of butter

1. Melt/Warm the honey in a medium sized bowl to make it quite runny.

2. To this add the Greek yoghurt and whisk until well combined. You can use an electric whisk to make it super smooth if you’d like. If you are using cream, whisk until thick.

3. Fold the whiskey in through the yoghurt mix. If you like it alcoholic, fold in some more.

4. If raspberries are in season and not insanely expensive, you can fold a few through the yoghurt mix.

5. Combine the frozen raspberries and honey and heat in the microwave for 2 minutes. This should result in the raspberries going all pulpy and the seeds separating from the juice. Again, if fresh raspberries are in abundance, use them instead.

6. Filter the pulpy raspberry through a sieve so that the juice no longer contains any seeds. Set this juice aside until later.

7. Finally, toast the oats on a frying pan with some butter and sugar until crisp. If you are vegan, leave the butter out. A cheat’s alternative would be toasted muesli or granola though traditionally it is toasted oats (Picture 2).

8. Now you have all the things you need to assemble a Cranachan (Picture 1).

9. Start with a layer of fresh strawberries at the bottom of a wine glass or a pretty dessert bowl.

10. Next a layer of the honey-whiskey yoghurt (Picture 3).

11. The third layer is of the raspberry juice sweetened with honey (Picture 4).

14. Cover with cling wrap and refrigerate overnight before serving. If you are super keen, eat right away 🙂

15. We had some neighbours over for brunch with their little girl of one so she had a mini Cranachan without any alcohol in her yoghurt or oats on top (centre glass, pictures 3-6).

One thought on “A healthy Cranachan”